Check out what is new with Navien.

KD Navien was voted the leading boiler brand in Russia, a land known for its bitterly cold climate. The brand was voted "Brand No.1 in Russia" for its household gas boilers, an industry first.

The "People's Brand" awards, which are organized by the Russian People's Brand Committee and the Russian Federal Chamber of Commerce are Russia's highest distinction for brands, and are given to products that have achieved the highest level of recognition and quality in Russia.  The awards are now in their 19th year, and are especially significant in that some 200,000 consumers participate directly in the vote through telephones and the Internet to choose true 'people's' brands.

KD Navien became the first winner in the household gas boiler segment, which was newly established this year. This was a major accomplishment, as the brand surpassed a plethora of global corporations to become the first ever boiler company to be named a Russian People's Brand. This is even more significant considering that the Russian market has traditionally favored European makers. Through this feat, KD Navien became the third Korean corporation, following Samsung and LG, to be bestowed the honor. 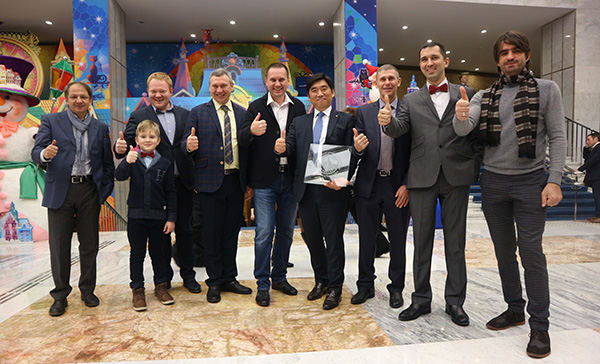 In Russia, KD Navien has been leading the market since 2011. It was the power of its technology that allowed the company, despite being a latecomer to the market, to emerge on top. KD Navien caused a sensation when it entered the market, introducing a product lineup with "malfunction-free controllers." In Russia, which is known as having an insufficient electrical supply infrastructure, voltages sometimes drop during times of peak power usage. KD Navien equipped its boiler units with controllers that are able to function without any issues even at low voltages, greatly enhancing consumer convenience. In addition, APS (Air Pressure Sensor) units were added to the units to enable safe operation even in the face of gusts and headwinds. The boiler units, which are able to be used safely and stably in any situation, were well-received by the market. As one Russian media outlet put it: "KD Navien's products are able to function without any issues even in the unstable voltages, bitter cold, and powerful winds of Russia. They have become the market leader in wall mount-type gas boilers thanks to their competitive prices and high quality."

Even last year, which saw the value of the Ruble plummet amid an economic downturn that affected all of Russia, the Russian branch of KD Navien achieved 15% growth. This year as well, amid the continuing economic crisis, KD Navien is continuing to grow, expanding its sales network into the CIS regions. As a testament to KD Navien's presence in the market, the company was voted best in show for 2 years straight at "Aqua-Therm," Russia's largest space heating appliance show.